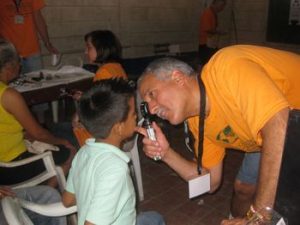 The team consisted of 8 eye doctors, six of whom are from Connecticut, 40 optometric students from both the University of Berkeley School of Optometry, State University of New York College of Optometry, and the Massachusetts College of Pharmacy and Health Sciences – School of Optometry, 1 optician and a number of translators and ancillary staff from both the U.S. and Nicaragua. Tom worked in the dispensary, dispensing eyeglasses. The doctors and students examined over 3200 patients over a 4 day period. Most patients needed eyeglasses for distance, reading or bifocals which were dispensed on site.

People living in Nicaragua are more susceptible to eye diseases such as dry eye, pterygia (a superficial eye inflammation), and cataracts because of its proximity to the Equator where the level of UV radiation is intense. These diseases, along with glaucoma were often detected and those that could be were treated with eyedrops. Sunglasses were also dispensed in order to minimize the risk of these eye conditions. No surgery was performed.

A secondary benefit to the mission was the mentoring of the optometric students. Five students worked side by side with each doctor and were encouraged to ask numerous questions. Dr. Mingrone took every opportunity to teach the 4 students who worked with him in Clinica Quatros, and the experience was very rewarding for both the students and doctor.

Dr. Mingrone looks forward to his next mission in January 2017.